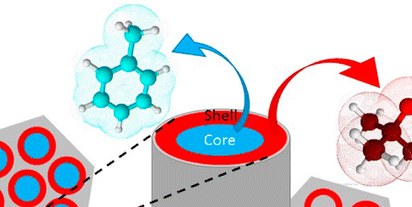 The confinement of liquid mixtures in porous channels provides new insight into fluid ordering at the nanoscale. In this study, we address a phenomenon of microphase separation, which appears as a novel fascinating confinement effect for fully miscible binary liquids. We investigate the structure of tert-butanol-toluene mixtures confined in the straight and mono-dispersed cylindrical nanochannels of SBA-15 mesoporous silicates (D = 8.3 nm). Small angle neutron scattering experiments on samples with carefully designed isotopic compositions are performed to systematically vary the scattering length density of the different compounds and assess the radial concentration profile of the confined phases. The resulting modulation of the Bragg reflections of SBA-15 is compared with the predictions from different core-shell models, highlighting a molecular-scale phase-separated tubular structure with the tert-butanol forming a layer at the pore surface, surrounding a toluene-rich core. The present structural study suggests that the microphase separation phenomenon in confinement, which so far had only been reported for a smaller pore size (D = 3.65 nm) and a unique mixture composition, must be considered as a general phenomenon. It also highlights the strength of neutron scattering method with isotopic substitution, which is a unique experimental approach to reveal this phenomenon.