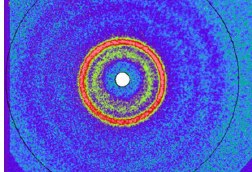 A specific lithic manufacturing of flints has emerged in the South of France from 4200 to 3500 ca B.C. This treatment involving a smooth thermal exposure procures an improvement of the ease of detachment and of the cutting properties of the flints. The origin of these new properties remains misunderstood. High resolution large angle neutron scattering (Barotron detector) is used to describe the structural modifications occurring after the thermal treatment. The comparison of the scattering exhibited by native silica flints and flints treated at the Neothilic age does not show a structural change but indicates a significant increase of the quantity of liquid water trapped in the treated flint. It is suggested that the Neolithic treatment was proceeded in several steps including a prior wetting of the flint and then a thermal treatment closing the porosity and trapping the liquid water inside the silica flint.