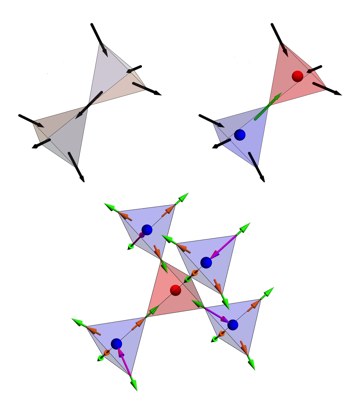 Fractionalized excitations that emerge from a many-body system have revealed rich physics and concepts, from composite fermions in two-dimensional electron systems, revealed through the fractional quantum Hall effect1, to spinons in antiferromagnetic chains2 and, more recently, fractionalization of Dirac electrons in graphene3 and magnetic monopoles in spin ice4. Even more surprising is the fragmentation of the degrees of freedom themselves, leading to coexisting and a priori independent ground states. This puzzling phenomenon was recently put forward in the context of spin ice, in which the magnetic moment field can fragment, resulting in a dual ground state consisting of a fluctuating spin liquid, a so-called Coulomb phase5, on top of a magnetic monopole crystal6. Here we show, by means of neutron scattering measurements, that such fragmentation occurs in the spin ice candidate Nd2Zr2O7. We observe the spectacular coexistence of an antiferromagnetic order induced by the monopole crystallization and a fluctuating state with ferromagnetic correlations. Experimentally, this fragmentation manifests itself through the superposition of magnetic Bragg peaks, characteristic of the ordered phase, and a pinch point pattern, characteristic of the Coulomb phase. These results highlight the relevance of the fragmentation concept to describe the physics of systems that are simultaneously ordered and fluctuating.