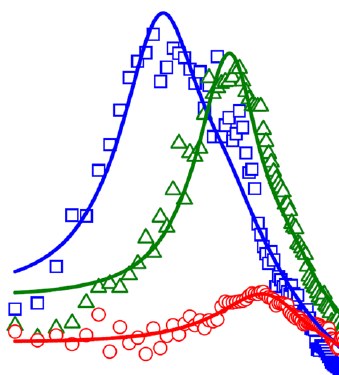 Prussian blue analogues magnetic nanoparticles (of radius R0¼2.4–8.6 nm) embedded in PVP (polyvinylpyrrolidone) or CTAþ (cetyltrimethylammonium) matrices have been studied using neutron diffraction and small angle neutron scattering (SANS) at several concentrations. For the most diluted particles in neutral PVP, the SANS signal is fully accounted for by a “single-particle” spherical form factor with no structural correlations between the nanoparticles and with radii comparable to those inferred from neutron diffraction. For higher concentration in PVP, structural correlations modify the SANS signal with the appearance of a structure factor peak, which is described using an effective “mean-field” model. A new length scale R*=3R0, corresponding to an effective repulsive interaction radius, is evidenced in PVP samples. In CTAþ, electrostatic interactions play a crucial role and lead to a dense layer of CTAþ around the nanoparticles, which considerably alter the SANS patterns as compared to PVP. The SANS data of nanoparticles in CTAþ are best described by a core-shell model without visible inter-particle structure factor.