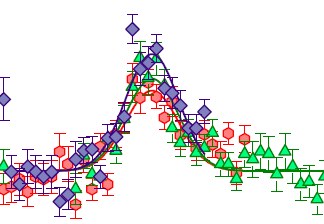 Among heavy-fermion metals, Ce3Pd20Si6 is one of the heaviest-electron systems known to date. Here we used high-resolution neutron spectroscopy to observe low-energy magnetic scattering from a single crystal of this compound in the paramagnetic state. We investigated its temperature dependence and distribution in momentum space, which was not accessible in earlier measurements on polycrystalline samples. At low temperatures, a quasielastic magnetic response with a half-width  ≈ 0.1 meV persists with varying intensity all over the Brillouin zone. It forms a broad hump centered at the (111) scattering vector, surrounded by minima of intensity at (002), (220), and equivalent wave vectors. The momentum-space structure distinguishes this signal from a simple crystal-field excitation at 0.31 meV, suggested previously, and rather lets us ascribe it to short-range dynamical correlations between the neighboring Ce ions, mediated by the itinerant heavy f electrons via the Ruderman-Kittel-Kasuya-Yosida mechanism. With increasing temperature, the energy width of the signal follows the conventional T1/2 law. The momentum-space symmetry of the quasielastic response suggests that it stems from the simple-cubic Ce sublattice occupying the 8c Wyckoff site, whereas the crystallographically inequivalent 4a site remains magnetically silent in this material.
A. Menelle, dépêche du 15/06/2015
Tweeter