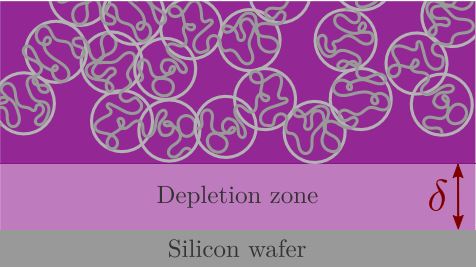 The role of the polymer volume fraction, ϕ, on steady-state slippage and interfacial friction is investigated for semi-dilute polystyrene solutions in diethyl phthalate in contact with two solid surfaces. Significant slippage is evidenced for all samples, with slip lengths b obeying a power law dependence. Navier’s interfacial friction coefficient, k, is deduced from the slip length measurements and from independent measurements of the solution viscosity η. The observed scaling of k versus ϕ clearly excludes a molecular mechanism of friction based on the existence of a depletion layer. Instead, we show that the data of η(ϕ) and k(ϕ) are understood when taking into account the dependence of the solvent friction on ϕ. Two models based on the friction of blobs or of monomers on the solid surface well describe our data. Both point out that Navier’s interfacial friction is a semi-local phenomenon.

Physics and chemistry for life sciences and the environment