The desalting/salting pathway: a route to form metastable aggregates with tuneable morphologies and lifetimes 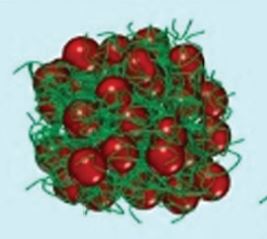 We investigate the formation/re-dissociation mechanisms of hybrid complexes made from negatively charged PAA2k coated g-Fe2O3 nanoparticles (NP) and positively charged polycations (PDADMAC) in aqueous solution in the regime of very high ionic strength (I). When the building blocks are mixed at large ionic strength (1 M NH4Cl), the electrostatic interaction is screened and complexation does not occur. If the ionic strength is then lowered down to a targeted ionic strength Itarget, there is a critical threshold Ic = 0.62 M at which complexation occurs, that is independent of the charge ratio Z and the pathway used to reduce salinity (drop-by-drop mixing or fast mixing). If salt is added back up to 1 M, the transition is not reversible and persistent out-of-equilibrium aggregates are formed. The lifetimes of such aggregates depends on Itarget: the closer Itarget to Ic is, the more difficult it is to dissolve the aggregates. Such peculiar behavior is driven by the inner structure of the complexes that are formed after desalting. When Itarget is far below Ic, strong electrostatic interactions induce the formation of dense, compact and frozen aggregates. Such aggregates can only poorly reorganize further on with time, which makes their dissolution upon resalting almost reversible. Conversely, when Itarget is close to Ic more open aggregates are formed due to weaker electrostatic interactions upon desalting. The system can thus rearrange with time to lower its free energy and reach more stable out-of-equilibrium states which are very difficult to dissociate back upon resalting, even at very high ionic strength.