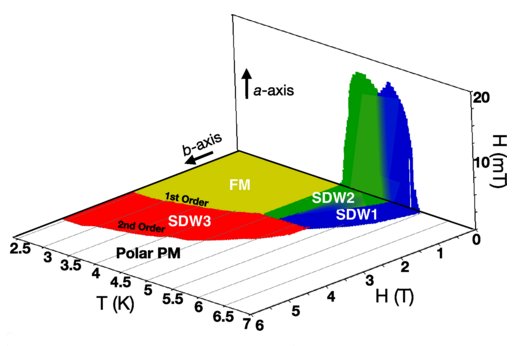 The schematic Ha−Hb−T phase diagram for PrPtAl with fields applied along the easy a axis (vertical) and hard b axis (horizontal), based on our measurements. SDW1 (blue), SDW2 (green), and SDW3 (red) modulated states

Ferromagnets are ubiquitous in everyday life, present in household items ranging from fridge-magnets on a fridge door to the sensors and motors inside, while dozens can be found in an average car. As temperature is raised ferromagnetic order disappears, but more rarely the formation of more fascinating states can occur in which the uniform magnetic order is replaced by a static magnetic wave. One mechanism for this is known as quantum order by disorder; the wave (the order) forms because it has more low energy excited states (the disorder) available to it than the uniform state and this lowers its energy, offsetting the energy cost of producing the wave.  In a recent paper appearing in Physical Review Letters such a static oscillation was achieved for the first time by applying a magnetic field at right angles to the easy axis moment in a ferromagnet, allowing the resulting increase in magnetic excitations to be clearly seen with neutron scattering.  In the long term the creation of such magnetic oscillations with variable pitch could be useful, for example, to make magnetic diffraction gratings for spintronics.