Three-legged 2,2′-bipyridine monomer at the air/water interface: monolayer structure and reactions with Ni(II) ions from the subphase 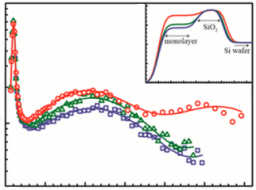 The behavior of compound 2 [1,3,5-tri(2,2′-bipyridin-5-yl)benzene] with three bipyridine units arranged in a star geometry is investigated in the presence and absence of Ni(ClO4)2. Its properties at the air–water interface as well as after transfer onto a solid substrate are studied by several techniques including Brewster angle microscopy, X-ray reflectivity, neutron reflectivity, X-ray photoelectron spectroscopy, Rutherford backscattering spectrometry, and atomic force microscopy combined with optical microscopy. It is found that compound 2 within the monolayers formed stays almost vertical at the interface and that at high Ni2+/2 (Ni2+/2 = 4000, 20′000) ratios two of the three bipyridine units of 2 are complexed, resulting in supramolecular sheets that are likely composed of arrays of linear metal–organic complexation polymers.